Beautiful hair is particularly important for the body and self image of women. They therefore find light, so-called diffuse hair loss particularly bothersome, although it affects both genders equally.

Women above the age of 50 are the most affected, yet the first signs of hair loss can already appear in an individual’s early 20s.

Thankfully research has shown that fighting hair loss effectively does not necessarily mean having to resort to hormonal treatments.

A major study conducted in Germany in 2000 has shown that a combination of Millet Extract, Vitamin B5 (Pantothenic Acid) and the amino acid L-Cysteine can bring hair growth back to within normal rates1.

The research is known as the ‘Priorin-Study‘. Since the study, new alternatives have become available that contain the same active ingredients, but are meaningfully enhanced, as well as significantly more affordable.

A poor diet is the most common cause of hair loss 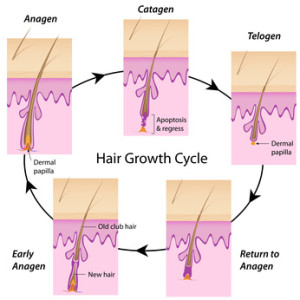 the five stages of hair growth

One of the most significant causes of diffuse hair loss is a deficiency in vitamins or trace elements.

A study examining the eating habits of 20,000 representative German discovered the following: the vast majority of people evidence a deficiency in several vitamins and trace elements2.

The culprit is the high content of sugar and white flour in today’s Western diet. These are so-called ‘empty carbohydrates’ and are often hidden in processed foods. The meal appears to be filling and provides energy, but only in the short term whilst not providing crucial vitamins and trace elements.

Research conducted throughout the world has repeatedly shown that a deficiency in iron3, zinc4, copper, iron5 or Vitamin E6 can lead to diffuse hair loss. Not enough biotin7 (vitamin H) can also result in hair loss.

Women, who suffered from diffuse hair loss were treated either with a combination complex of L-Cysteine, Pantothenic Acid and Millet Seed Extract, or received a placebo. Initial results were detected with the help of a microscope after just four weeks.In addition, hair growth of the study participants in both groups was compared after three months.

The group of women who received the combination supplement demonstrated a return to normal hair growth. The control group that received the placebo did not show the same results.

Dermatologists who conducted the study concluded the following: “Women who treated their hair loss with Priorin, as opposed to the placebo preparation, reported a significant increase in the number of individual strands of hair that evidenced growth after only three months.”

Since the research was released several large manufacturers of hair products have developed products with such nutrient combinations. 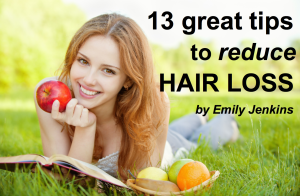 The two products in this group, which stand out are tricologic man and Hair Plus. The former offers a large array and high dosage of hair nutrients, however many of which are scientifically unproven and at almost three times the price of amitamin Hair Plus.

As well as the core formula this products also includes key hair nutrients like folic acid, zinc, iron and copper.

In summary, research supports the effectiveness of certain nutrients in not only growing healthy hair, but actually reducing hair loss. The key, however, is always to ensure a constant, ongoing supply – because our hair only grows by approximately 1 centimeter per month, and it never ceases to do so.

This website uses cookies to improve your experience while you navigate through the website. Out of these, the cookies that are categorized as necessary are stored on your browser as they are essential for the working of basic functionalities of the website. We also use third-party cookies that help us analyze and understand how you use this website. These cookies will be stored in your browser only with your consent. You also have the option to opt-out of these cookies. But opting out of some of these cookies may affect your browsing experience.
Necessary Always Enabled

Any cookies that may not be particularly necessary for the website to function and is used specifically to collect user personal data via analytics, ads, other embedded contents are termed as non-necessary cookies. It is mandatory to procure user consent prior to running these cookies on your website.