It has long been known that essential amino acids play an essential role in the building of muscle tissue in the body.

These must be present in the diet or obtained via supplements as they are not produced or stored within the body.

A new study has shown that amino acid supplementation helps with surgery recovery, because it has specific benefits for patients who have had knee-replacement surgery1.

Background of the Study

Research was carried out in 2013 at the University of Oregon in the USA and published in the ‘Journal of Clinical Investigation.’ A team, led by Professor Hans Dreyer, evaluated a group of patients recovering from knee-replacement surgery, also known as total knee arthoplasty (TKA). Their research focused on the common problem of atrophy, or muscle wastage, in the quadriceps. 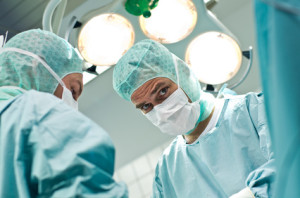 The supplement contained a mix of rapidly absorbed, raw amino acids that included leucine, lysine, threonine, valine, histidine, methionine, isoleucine and phenylalanine. A dosage of 20 grams of EEA and 40 grams of placebo was given twice daily for one week before and two weeks after the knee-replacement surgery. The patients in both groups had a mean age of 69 years old.

Results of the Study

When the loss in quadriceps muscle mass was measured six weeks after surgery, it was found that the control group who received the placebo averaged a loss of 18.4%. The group given the essential amino acids had an average loss of 6.2%.

Both groups showed the same amount of atrophy in the non-operative leg. Functional measurements were also taken, both before the knee-replacement operations and at six weeks after surgery, of the ability of the patients to carry out a series of basic physical tasks such as rising from a chair, walking a short distance and climbing and descending a flight of stairs.

Doctors involved in the post-operative care of knee-replacement surgery patients have welcomed these results as a significant breakthrough. It offers a cost-effective way to jump-start the rehabilitation process and speed up recovery times. Of particular note is that fact that the functional improvements in the non-control group occurred four weeks after the essential amino acid supplementation was stopped.

This implies that the benefits are durable, and continue to have a positive action on restoring lost quadriceps muscle mass for many weeks after essential amino acid supplements are taken.